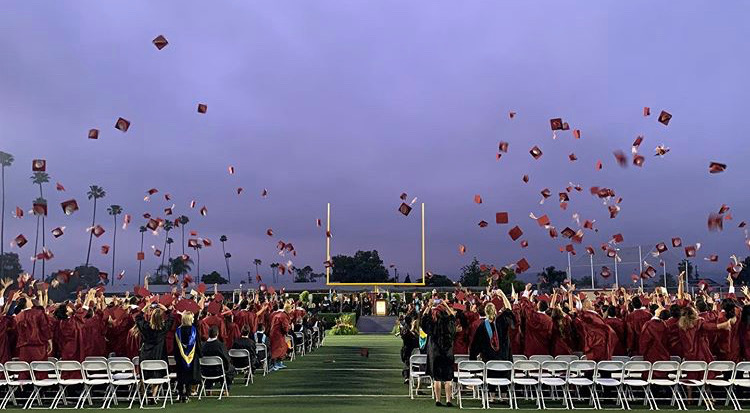 Graduates did their cap toss in recognition of their achievements. Courtesy of @westcovinahighschool Instagram

Graduates did their cap toss in recognition of their achievements. Courtesy of @westcovinahighschool Instagram

On June 6th 2019, families and friends crowd the bleachers, awaiting to see the success and celebration of achievements the 61st graduating class accomplished. The long-awaited graduation ceremony began at 7pm, introductory with WCHS symphonic band led by Stephen Olivas playing “Pomp and Circumstance” per tradition. At this time, faculty, staff, and graduates all lined in to take a seat before the stage. Shortly after everyone sat down, Monica Sowles, Class of 2019 Vice President was first to speak. She spoke in honor of people fighting for our country, and asking in respect for a moment of silence dedicated to them. West Covaires proceeded to perform the National Anthem alongside JROTC’s Posting of the Colors. After all respect was due, Class President, Ashley Ha, brought forth the attention of the leading 3 flags. The flags included a maroon Bulldog flag, a blue Spartan flag, and a green Trojan flag. Atop the flags were streamers symbolizing the decades of classes graduating before 2019. These flags represent the “rich and mighty history which is found in the graduates who have come before them”. Ha also emphasized the Honor Guard holding 5 flags that “are the foundation of what makes them part of Bulldog Country”; academics, arts, activities, athletics, and achievements.

Ferreiro’s touching speech compared the high school experience to a single day in time. Freshman year is in relation to dawn, and as the day progressed, she spoke in detail of the challenges faced in every year. Concluding with senior year, where the sun was setting close to nighttime, she conveys to her peers to remember “to be at peace with and respect themselves before instilling peace and respect to others”. The closing to her speech reflected on the class’ potential, and conclusively ended with telling her peers to have a good night, referencing their entrance into the real world.

Before the 2nd Valedictorian speech, Sophia Deanda, was selected to lead the Bulldog Annual Candle-Rose Ceremony. This ceremony symbolizes the passing of student leadership from the Class of 2019, onto the Class of 2020 and so on. Deanda announced the final Valedictorian speech by Narine Setian. Setian’s take on the modern society’s influence on high school was heartfelt, and communicated the stresses each high school student endures at some point or another. She advises her peers to “value the knowledge the experiences at WCHS have provided, and to take it with them all throughout life”. Moreover, she concludes her speech quoting Ariana Grande’s “Thank you, next” , and in her words “Thank you Class of 2019, she can’t wait to see what they all do next”.

ASB President, Ariana Escobedo invited the anticipating graduates to sing the beloved Alma Mater, and the moving of the tassels to the right side, symbolizing their completion of high school. Henceforth, Superintendent Dr. Charles Hinman praised faculty, and congratulated everybody for making it through the trials and tribulations of high school.  Ellen Miranda Jimenez from the Board of Education pronounced the Class of 2019 to be graduated, and the cap toss commenced after. Congratulations to the Class of 2019, and may you all be successful in your future endeavors!

If we defeat our fears, our hindrances, we can carry those hopes out of the dark, and let them shine in the light”