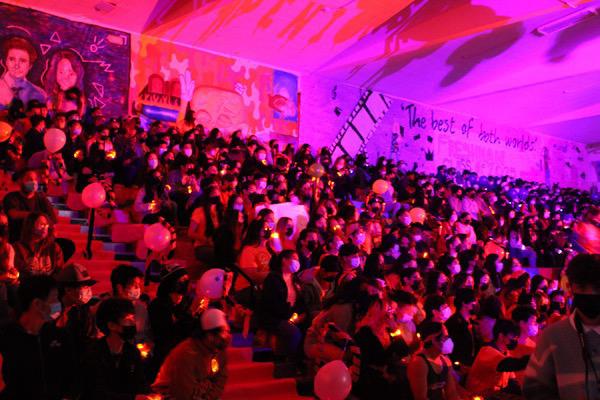 This year started off with our first indoor rally since the start of the pandemic in 2020 featuring performances from arts and entertainment groups such as drumline, dance team, colorguard, and much more.

Many were skeptical about holding an indoor rally as  COVID-19 cases have been on the rise especially during the beginning of the second semester. Class council, Link Crew, Renaissance, and ASB have worked hard to make this rally happen by taking time out of their day to sketch, paint, and set up posters in our bulldog gym

“It has been a really busy week setting up all the posters and has been time challenging as we have had to do them quickly and it has taken time out of my day afterschool, but it has been a bonding experience with class council”, said Aldo Garibay class of 2023 class council.

The rally started off with AFJROTC and Wescovaires performing the National Anthem and later on revealing the 2022 prom theme “Enchanted Forest”, which will take place on April 2nd. The rally continued with the dance team, colorguard, varsity cheer, and drumline performing “Space Mission”.

Following the drumline performance, a sneak peak of the musical ‘Mamma Mia’ was performed by the drama class, which will be held on March 3-6. The traditional “victory bell” was rolled out in the center of the gym, allowing the varsity sports teams to ring the victory bell as an appreciation for our winter and spring sports.

The rally concluded with student spirit games hosted by class council, both of which the senior class of 2022 were victorious.  Two students from each class participated to compete for spirit points.  They were directed to unwrap a box to get a hold of the bean bags which had to be made in the hole.  This was followed by a class chant which was won   by the senior class of 2022 in rally A, but was defeated by the junior class of 2023 in rally B.  Overall from students, teachers, and staff this was a successful and enjoyable first indoor rally.