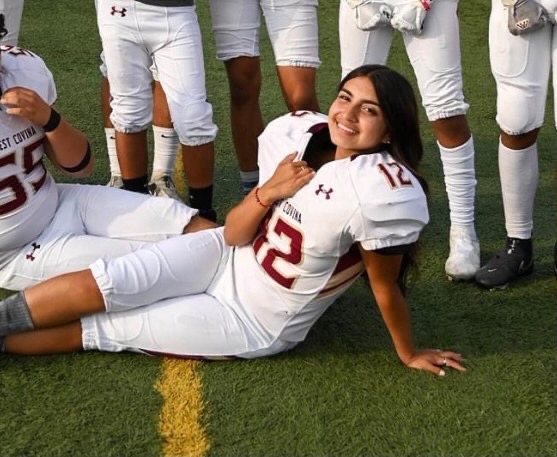 Izabel Roman kicked off her freshman year as the only female on the freshman football team. Roman has always had an interest in sports and now at age 14 she’s on the team as the kicker.

Many people might assume that girls would be treated differently on an all-boys football team because they’re not masculine or because they wouldn’t be able to handle it.

“Don’t let stereotypes or whatever people say to you about something that you’re passionate about,” Roman said. “Of course there’s people that are going to talk down on you. Don’t let that get to you because you’re a player and you’re an athlete just like anybody else.”

“I’m treated no different than the guys,” Roman continued. “I’m one of the guys I guess you could say.”

Fellow teammate Joshua Gonzalez shared his thoughts about Roman breaking stereotypes as one of few females to ever join WCHS football.

“When I first heard about Izzy being on the team, I thought it was cool that a girl actually joined because most girls wouldn’t want to be in such a dangerous sport. And who knows? It might have encouraged other girls to tryout for sports,¨ Gonzalez said.

According to freshman football coach Joe Carrillo, Roman is hardworking and very passionate.

“She filled in just right. She came in wanting to try out just like all the other boys and she works hard every single day,” Coach Carrillo said.

Many people would be scared to join a sport like football because of possible injuries or because of the tackles.

“She got a tackle on our game against Montclair. She kicked the ball and it got through most of us. Izzy went for the tackle and saved us from getting a touchdown on us,¨ Gonzalez said.

Roman’s current position is a kicker and punter, but she plans to try out for the lineman position and has big plans for herself in football. She currently takes honors classes, plays soccer and football to balance out her time.

Roman is the first female on WCHS’s football team since 2018, according to Coach Carrillo. She is one of more examples in today’s society where people are breaking gender stereotypes of females playing what’s traditionally accepted as a man’s sport.